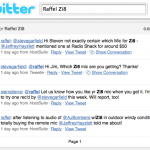 Part 2 of a recent interview with Jeffrey Hayzlett, Chief Marketing Officer and Vice President, Eastman Kodak Company. Jeff’s complete biographic information can be found in part 1 where we covered social media and the graphic arts as well as trends in graphic arts trade shows. We’ll pick up with Jeff’s take on digital presses.

Jim Raffel: Shifting gears away from social media since I do have the CMO of Kodak on the line. Digital presses vs conventional presses, where do you see that market going?

Jeffrey Hayzlett: Digital presses are going to have a much higher adoption rate than you will have of more conventional traditional presses. Because of the technology advancements and the other thing is in terms of quality. Look at our PROSPER press. Our PROSPER press allows you to start doing offset using inkjet. We’ve approached offset quality with an inkjet technology. That allows you to do different things with variable print, more targeted mailings, customization, versioning. All with the speed of digital but at the same time with the quality of offset and that’s phenomenal and we are starting to get into the cost factors as well. There are just a lot more of those presses going into the marketplace than will be traditional presses over the next few years.

Jim Raffel: Are digital presses reaching the same point as CTP where now almost any printer can afford the start-up costs?

Jeffrey Hayzlett: Yes, the key is going to be what the technology is going to be and I think clearly from DRUPA and then what you’ll see at IPEX it’s still inkjet. Inkjet going to be the dominant player moving forward. Even though toner from a digital press perspective has been big from a total number of units in the future it will be inkjet.

Jim Raffel: Shifting gears again to marketing I look at the pile of mail in my mailbox and it’s 1/3 to a 1/4 of the size it use to be. It would seem to me the opportunity to use quality direct mail pieces a a tool to drive traffic to a web-site is right.

Jeffrey Hayzlett: Yes, the marketer who doesn’t have direct mail in their arsenal is really making a big mistake. Good direct mail is highly effective.

Jim Raffel: Do you see direct mail as being under utilized now?

Jeffrey Hayzlett: Without question. This is a marketing tool that everybody should be utilizing. There not using as frequently as they should or as effectively. Also, most don’t do it with the frequency they should. For every dollar you put in you get a $13 return on the investment when you do it well. When I do direct mail I see that or higher. If that’s the case I wouldn’t be wise to not utilize this tool.

We wrapped up the interview with a casual conversation about Kodak’s Zi8 HD video camera. I use this camera to film video blog posts and other fun video projects (soon to include customer testimonials for this web-site – if you want to be the first let me know). What I found interesting was Jeff’s authentic excitement about the product. He explained that Kodak went out and asked their customers what they wanted and built a better product than the competition. Kodak added features like 5 megapixel still camera capabilities, a mic jack so a remote mic can be utilized, and 1080p resolution. All features the competition doesn’t have and now Kodak even offers the camera in a waterproof version.

The Zi8 has been wildly successful because it sells itself. Bloggers like myself who get their hands on one are impressed enough with the product to discuss it on social media channels like Twitter.

Jeff explained that because of social media conversations like the one above they have been able to sell as many Zi8s and they can make with almost no traditional advertising.

So, the interview circled back to social media where is started. The interview that only happened because of social media. This all started with a tweet asking Jeff if I could interview him for our new blog and there you have it a two part interview with one of the leaders of our industry.