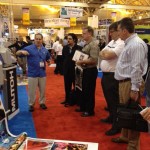 Last week, we spent two days at a partner’s facility shooting video of their printing process in conjunction with our color verification solution.

We’ve been working closely with Mutoh over the last year to promote our software which is part of the ColorVerify solution, built around Mutoh’s onboard SpectroVue to ensure optimal color reproduction. This relationship finds us in Mutoh’s booth at trade shows several times a year.

Show me, don’t tell me

We work closely with Mutoh’s marketing staff to come up with a strategy to promote ColorVerify. ColorMetrix CEO Jim Raffel makes himself available during designated trade shows to do live demos of the software several times a day. However, last year we realized the importance of video in our marketing campaign. We created two videos (one was a quick tour of the how the software works and, in the other one, Jim describes the importance of color verfication.

We could have written all this information out to include in the software package and press releases, but our team decided from the beginning that showing would be much more powerful than telling.

Do it right or not at all

Video can be an essential tool in your marketing arsenal – but only if it’s done right. The videos we created last year are no longer accurate. Like most software , ColorVerify has gone through some development changes and upgrades in the last six months. As we were gearing up for the next trade show season, we had to acknowledge that fact as a team and agree that new video needed to be produced.

Every movie needs a script

We have figured out that to produce the best video we need a good plan – or script – in place. Our friends at Mutoh said it best when we visited last week: We needed to establish the who, what, when, where, why and how. When we identified those six factors, we found it easy to write the script for what we wanted the video to be.

The two-hour meeting we had to discuss the script also helped us determine what video needed to be shot in-house and what could be shot from our home base and spliced in later. The video shoot went much smoother and faster this time around because of that meeting.

While we haven’t yet put together the final video, we know from what we’ve planned out and what we’ve shot that the time we put in will be well worth it. Our team has worked together to create a video that we can use in trade shows but will also be included in the software package as a training module.

When it comes to video, the work you put in ahead of time is sometimes more valuable than the time you spend in the production booth.