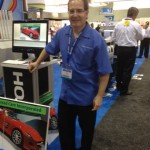 Last week, we demonstrated the ColorVerify process control solution at the International Sign Expo (ISA) in Orlando. We partnered with Mutoh America to develop and promote ColorVerify and they have provided us with space in their booth at several trade shows over the past year to help promote the new product offering.

We’ve also noticed that trade show and event coordinators have been using social media more actively and consistently to engage with attendees. We’ve been a part of that and we will continue to follow this trend for future events and trade shows.

To be effective, have a plan

Our social media strategy generally begins months before a significant event. After several email exchanges, phone calls and even onsite meetings, we come up with a plan together that will benefit both companies’ interests.

The ColorVerify plan resulted in a mix of print, social media and live demonstrations at the show. Then both companies cross-promoted the event across various platforms to effectively get the word out to a wider audience.

The inclusion of video in your promotional materials and coverage of events can be vital to your social media success. For our purposes, video is a large part of our marketing arsenal. We see video working best in these ways:

Promotional and/or training: Videos are great for “how-to’s.” ColorMetrix has its own YouTube channel and you can find several “how-to” videos about our products. The most recent video listed is the same one you can find on our home page and the one we played in Mutoh’s booth at ISA in between our live demonstrations. This time we even burned it to a CD along with some educational literature so that attendees could take it with them.

Quick and easy explanations: During ISA, we took a short, 30-second video of the beginning of our CEO Jim Raffel’s demonstration. Those 30 seconds answered a very simple question: Why use ColorVerify? This video was posted on Twitter and Facebook during the show to let attendees know about the demos and explain quickly why they might be interested in stopping by the booth.

Sharing with those who can’t attend: We gave at least a dozen live demonstrations of ColorVerify. But what about people who might be interested in the product but couldn’t attend the show? There’s no need to worry because we shot video of the complete demonstrations as well and, as soon as it’s all edited, we’ll be uploading that to our YouTube channel too. (We wish we could share it with you today but we’ve only been back for two days. Social media takes time, folks!)

Cross promotion is great, but don’t spread yourself too thin

Again, we are fortunate to be partners with Mutoh because we were able to promote all of our products, services and announcements on our various networks. Working trade show booths is hard work. You’re on your feet for 8+ hours a day giving demonstrations and answering questions. It’s unrealistic to think you’re going to be able to post everything on every network.

Since Twitter is more immediate (and because ISA had an event hashtag to follow and a Twitter wall of postings), we handled that network on site at the show. However, photos and video with information were sent back to our home base and an employee who stayed behind posted them to our Facebook page. This strategy was part of our planning well before the event took place.

Our CEO Jim Raffel was heard repeating this mantra several times throughout the show. But what does it mean?

To us, it meant more than what we have already mentioned. Engaging with the show coordinators and attendees was also at the top of our priority list. Below are some examples.

Celebrating 60 years: Mutoh celebrated its 60th anniversary with a 90-minute party in its booth on the second day of the show. Attendees received free refreshments and lots of giveaways. Both companies tweeted out announcements about the party to ISA attendees, making sure to include the event hashtag so that they ended up on the show’s Twitter wall. We ended up with a great crowd at the party that afternoon.

Happy hour: Each day, ISA hosted a happy hour at the show and provided free beer at stations around the exhibition hall. It was a no brainer to help promote that.

You ran out? We have some!: ISA was so well-attended this year that they actually ran out of lanyards for attendees by the second day. We saw ISA tweet that out and knew Mutoh had plenty of lanyards at the booth. We let attendees know that they could stop by and pick up a Mutoh lanyard. It was fun to walk the show floor for 30 minutes on the last day of the show and notice all the Mutoh lanyards milling around.

New contests: This year, ISA had a best new product and best green product competition. Mutoh had a product entered in each. The awards were decided through attendee votes by texting codes to a certain number. At first, we tweeted out descriptions of each product with the code and number on how to vote. Then we designed a sticker (which Mutoh printed right there at the show) with all the information on it for both products. Again, it was fun to see these stickers floating around the show floor (and even on our marketing coordinator Shelby’s back!).

It’s not over when it’s over

ISA might be over, but we aren’t finished with it. We still have more photos to post, videos to edit and some general follow-up sessions to determine what worked, what didn’t and what we can do better.

What are your thoughts on using social media at trade shows?