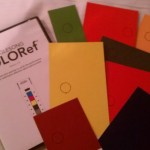 In late November and early December of 2011, our resident marketing and project management guru Shelby Sapusek and I participated in what we termed “Measure Party 2.0.” When we include Measure Party 1.0 and 3.0, a total of seven people from four different companies have participated in measuring almost 500 color swatches with a half dozen different instruments in four different locations. This has been no small undertaking; but “why” we all did it is what matters.

There might be a problem with the traditional scientific method. We have computers and fuzzy math these days. There is a great deal of technology to overcome anomalies in collected data. Data can be collected and analyzed faster than ever. Our own research and development creation, currently named “normalizer,” can crunch all 500 of those measurements we made six different ways in way less than a minute.

Perhaps the tried and true scientific method slows progress down. Don’t get me wrong. We carefully measured all our samples under similar and controlled conditions. Notice I did not say identical and perfect conditions. There is a reason for that.

For almost two decades now, we show up with nothing but our wits and our out-of-the-box software to help folks make color do things it’s not quite supposed to do. Over the years, that means we’ve built ancillary tools (like custom spreadsheets) to support our efforts. It was one of our special spreadsheets that ultimately unveiled what could prove to be a watershed moment in the color measurement world.

So here’s the deal: Do you want the measurements from two spectrophotometers made by two different manufacturers to match? Well, that’s nearly impossible for a lot of really good reasons dictated by the physics of light and thus color science. However, we’ve built something called “normalizer” that can get you pretty darn close.

We’ve spent enough time in the field with customers to know that “pretty darn close” is more often than not good enough in the color world. Compared to many other industries and manufacturing processes, color reproduction of print has relatively wide tolerances in most cases.

Since the world of color measurement is not perfect and results are seldom linear in nature, we choose to do our research and development in less than traditional ways. We go out in the field and talk with users about what they are seeing, what works and what does not. We get a feel for how good “good enough” is. Then, we build the software tools to get folks from where they are in the color measurement game to where they need to be.

We are a technology company. We do R&D and we make things more then sell them. Our goal is to build software tools that allow our end users to create data warehouses full of standardized color measurement data. To that end, we built on existing published research to create a system that will normalize the spectral measurements of one instrument to that of another.

The proof is in the pudding

After almost 18 months of development, we are putting the algorithm through the paces. It’s standing up well to almost everything we’ve managed to throw at it. Is what we’ve done earth shattering or groundbreaking? Honestly, it isn’t because we built on existing research. Others have done this in different ways. What’s unique is we are commercializing our solution. It probably won’t be as a product we ship, but as embedded technology you’ll see in other folks’ products.