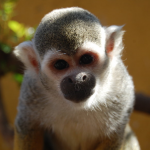 At the University of Washington, a color vision expert by the name of Jay Neitz and his neuroscientist wife Maureen Neitz believe they might have found a way to cure color blindness. Through their company, Colorvision Molecular Genetics, they have introduced some gene therapy to spider monkeys, who typically have red-green color blindness. They believe this same genetic therapy could be used on humans to cure red-green color blindness, also known as protanopia, a commonly inherited type of color vision deficiency.

Seeing in shades of gray

If you’re unclear on how rods and cones differ when interpreting color, let’s take the following scenario. In the middle of the night, you wake up wanting a glass of water. A streetlamp shining through your windows provide a little bit of light so you don’t use your own electricity to light your way.

Navigating your house without lighting means that you moved around in low light conditions. In those conditions, your eyes rely on the rods for sight. Rods do not provide color. As you made your way from the bedroom to the kitchen and back, you likely only saw shapes of objects in shades of gray.

The three types of cones depend upon light wavelengths of a certain minimum intensity. Rods still need “light” to see, but are capable of seeing in lower intensity light that may lack the minimum light intensity at the bandwidths needed to see color.

As seen in the chart at left, the three wavelengths of red, green and blue-violet intersect each other to produce combined colors such as yellow, magenta and cyan blue. Red, green and blue-violet are considered the eye’s primary colors while yellow, magenta and cyan blue are secondary colors. The latter appear brighter because they rely on two combined cones of reflective light to appear.

When you’re not seeing red (or green)

Some color theorists argue that while red-green blindness is the most common of the color vision deficiencies, it’s also the worst to have. That’s because the red and green cone wavelengths are the easiest to see.

Notice in the chart above that the blue-violet wavelength peaks much higher on the spectral sensitivity scale. That means that it takes more light to see that blue-violet color than it does red and green. Seeing only in blue-violet due to red-green blindness can also cause headaches over extended periods of time because the eye has to struggle harder to see it if lighting isn’t adequate enough.

Have you ever wondered why the color pink is associated with baby girls and the color blue is associated with baby boys? According to The Atlantic article “How Color Shapes Lives” published in January 2014, department store marketers started the pink/blue trend between 1900 and 1940. Since then, we have been socially accustomed to the pink/blue trend. In fact, we have become so culturally tuned to this color association for gender that the colors can actually affect mood.

A researcher named Alexander Strauss performed a study in the late 1970s that displayed how pink affected the moods of otherwise strong, burly men. During the study, he put about 150 men in pink rooms. After only 15 minutes of being trapped in that color environment, more than 98 percent showed signs of muscle weakness and slowed heart rates.

While that it is an interesting study, it only take a few key strokes to perform an experiment of your own. The Atlantic article suggested that you search for the phrase “baby girl” and then “baby boy” on Google. The image above is predictable but also very indicative of how our culture has taken the colors pink and blue and attributed them to different genders.

When it comes to interpreting color, red can fall into many categories:

Perhaps these different interpretations for the color red is the reason some color theorists believe red-green color blindness is the worst. Whatever the reason, the husband/wife Neitz team of the University of Washington is trying to find the cure and they’ve made significant steps through their genetic research with spider monkeys.